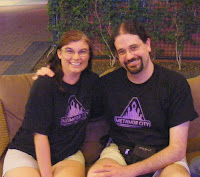 Usually I feel dread when I'm tagged for these meme's, but this one is actually pretty neat. Andy from the Andycast tagged me, and the meme is you have to go to your 6th page of flickr photos, and blog about the 6th picture. Here's Andy's post.

Like Andy, I have already blogged about the 6th picture on the page, so I figured I could just pick whatever photo I wanted. I've blogged plenty about our summer travels too. I thought about a post on my beautiful daughters and how quickly they are growing up, but figured it would turn into a whine about how old I'm getting. So I chose this photo, which is of myself with author Chris Lester, both of us sporting the T-shirts of his podcast, Metamor City.

Now a lot of people who read this blog are family and non-internet/twitter friends, so they don't know very much about my other hobby. Sure, they know about the political podcast, and they also know about KWSS. But I don't talk too much about the voice acting I do. I was bit with the voice acting bug back when I met Jon Russell of Dream Realm, and I haven't been able to stop since.

Metamor City is nothing short of amazing, and I'm not just saying that because I have a role in it. If you love fantasy stories, with amazing detail that sends you right into another world, then this is a story for you. Oh, and it has vampires! And empaths! And magic! And sex! Oh my!

My role is Sasha, who is my opposite in nearly every way. Nearly. She's blonde, warrior strong, can read minds, and deeply in love with another female. What I can relate to is her fierce devotion to her family, and the drive to protect them at all costs. I absolutely love playing Sasha. I had no idea at first it would be such a pivitol role, and when I saw what it would entail I was a little nervous. When you're bringing someone's vision to life, you want to make sure you treat the character the way the author envisioned. So far I think I've done pretty well. Chris is a wonderful director, and has really given great- well, direction!- in how best to bring Sasha to life. If you are looking for a good book to listen to, head over the Metamor City's website and subscribe to the feed.

Chris recently made the move across the country to California. When he stopped in Phoenix briefly along the way, we had a small group get together at Tempe Marketplace. It was wonderful to finally meet him in person, and it was a great evening of food and laughs and all kinds of conversation.

See, sometimes it's not so bad meeting guys on the internet! ;-)

I hereby taggeth Debbie, Dawn, Paul Fischer, Temple Stark, and Marla. Don't groan when you get this- it was fun to go back in the flickr photos and blog about what I found!
Mused by Dani at 10:36 PM

Is it weird that I put you under 'celeb blogs' in my greader?

The Meek Shall Internet The Earth

Dani
Social media. Audio editing. Voice work. Writing. Podcast Producer and Host. I can help with that. In 2006 started my political podcast, Truth Seekers. Politics is something I am very passionate about, as well as humanitarian and racial issues. I am also the midday announcer with kwss 93.9 out of Phoenix, AZ. I am a voice actor, as well as read for podiobooks and short-story readings for other podcasts. Have also been on the planning committee for PodcampAZ, and lead the TechPhx conference for three years. In my spare time, I am a mother of two, CASA volunteer, play the viola occasionally, and chat online WAY too much.

Honestly, More Than You Need To Know